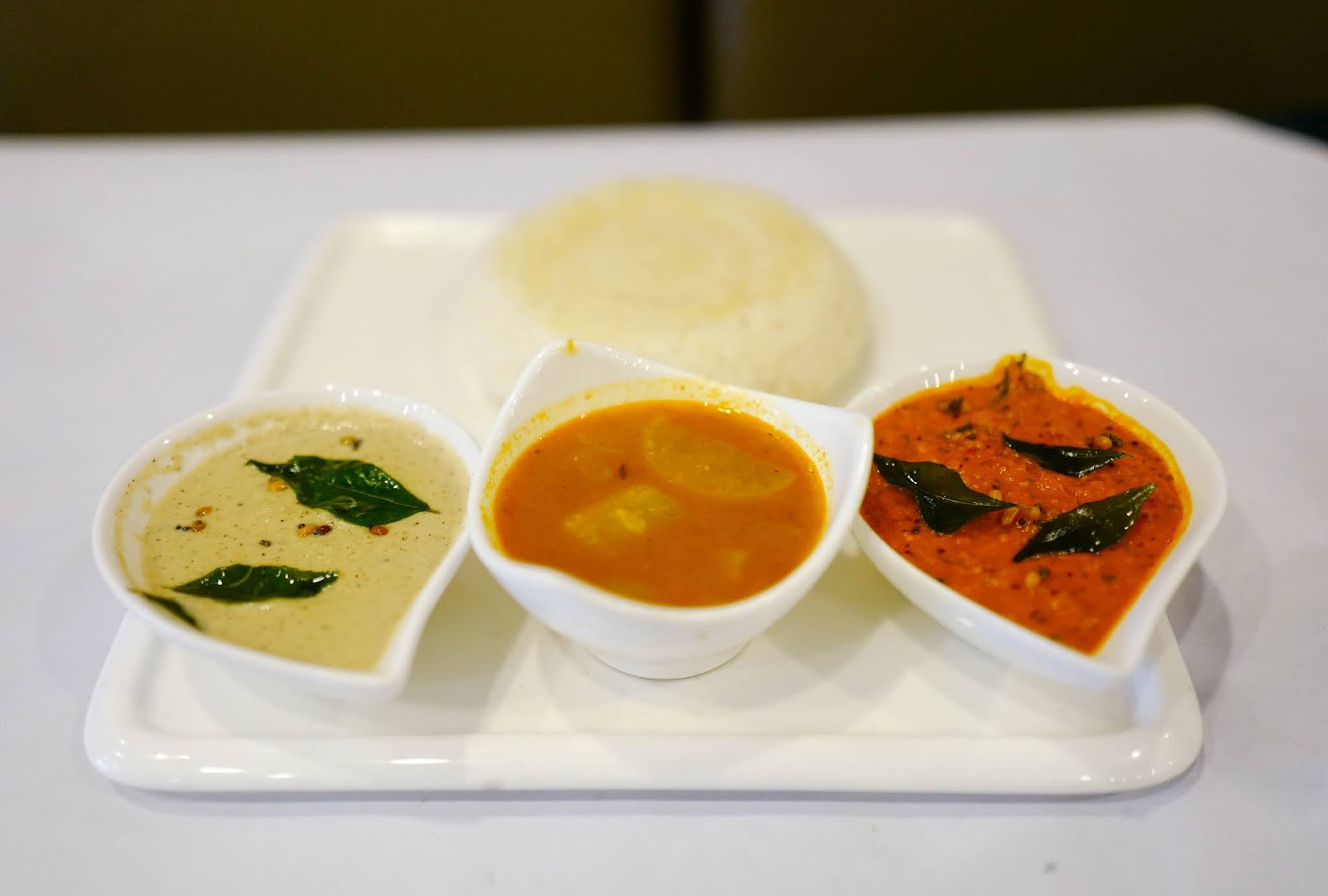 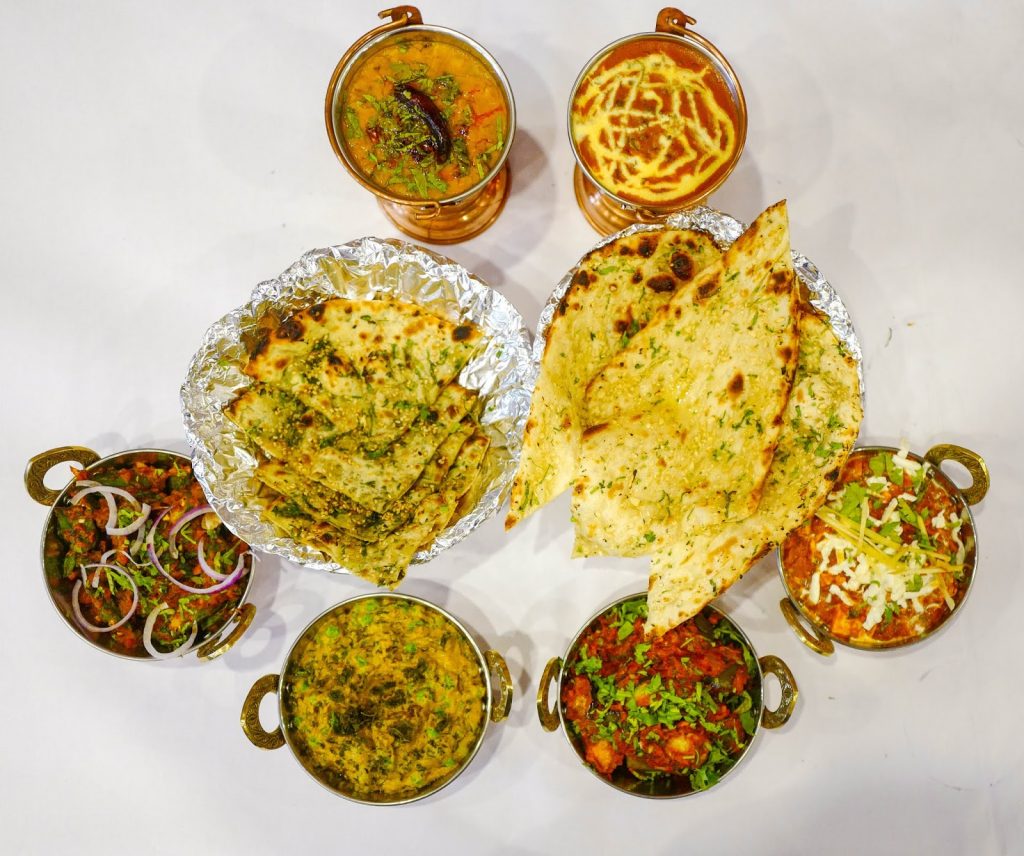 This is cooking with heart – nothing is wasted, since the kitchen also provides complimentary sustenance to people who require it (a sign outside reads ‘Free food for the needy, not the greedy’), often sending nourishment to neighbours as well. So while South Asian eateries are abundant in this area, Mr. Naan & Mrs. Idly stands out as a love letter to the lushness of Indian fare, a match made in paradise for fans of this gastronomic genre. 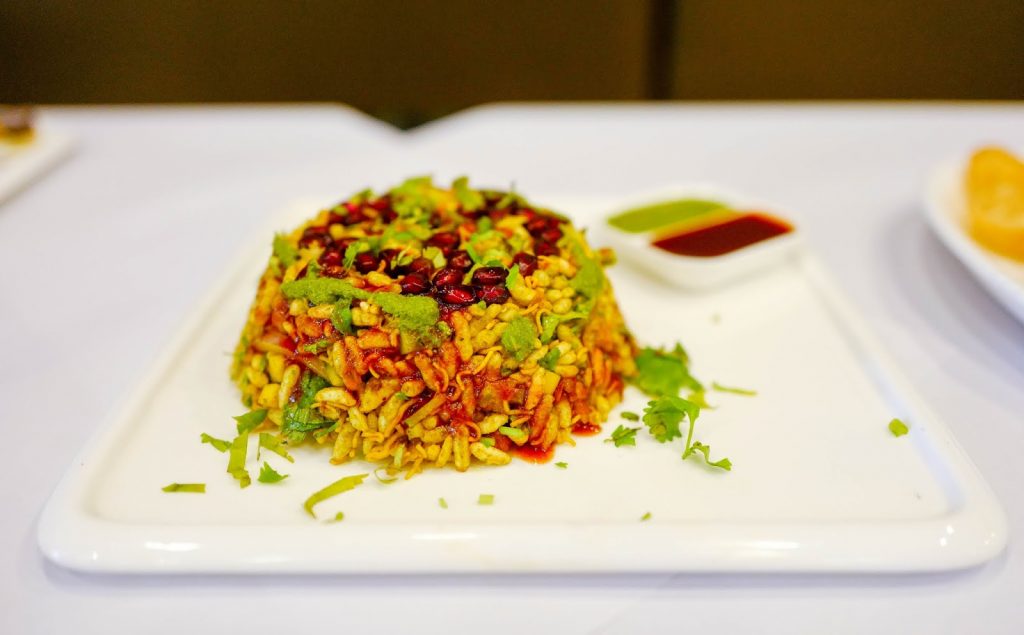 Note that some of these food photos are for illustrative purposes, as this visit was in March 2020.

Start with snacks to whet the appetite – crave-worthy chaats (savoury treats) like bhelpuri (spicy puffed rice, fluffy-crispy to the bite, enriched with onions and tomatoes, enlivened with pomegranates and sour mangoes, with tangy chutneys on the side).

Classic staples are accounted for – pani puri (a DIY experience here – crack the hollow puri to fill it with the chickpea mix), plus an array of samosa and kachori (the latter stuffed with yellow lentils soaked and parboiled for creaminess, laced with fennel seeds, coconut and coriander, with pronounced masala spice notes).
Indecisive folks, beware: The selection is head-spinningly wide and long.
Even Indian-inflected sliders and sandwiches hit the spot here – vada pav might be nicknamed ‘the poor man’s burger,’ but there’s nothing impoverished about its rich taste and textures, courtesy of the plump potato dumpling at its core between house-baked bread.
The aloo tikki burger is also alluring, with a garlicky, masala-spiced potato cutlet as its patty, while the the cheese-layered aloo chutney grilled sandwich rounds out this carb-loving triumvirate of potato-with-bread pleasures. 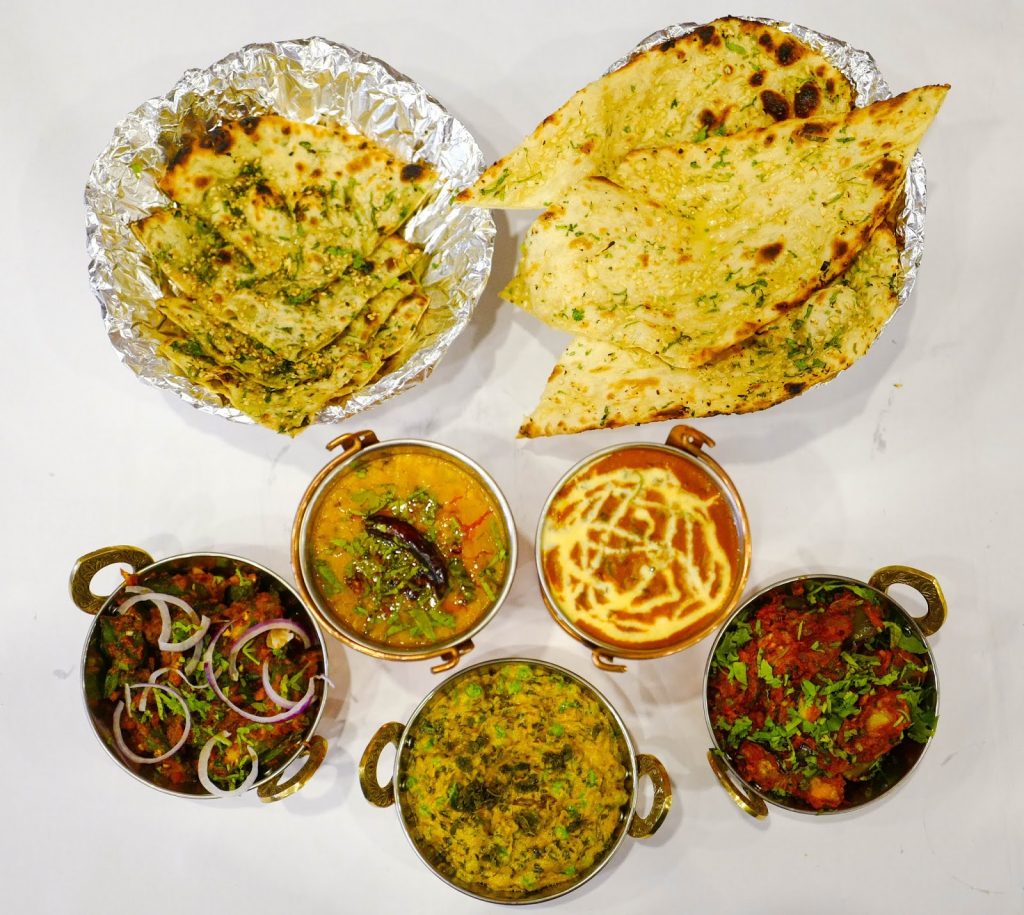 If you’ve rustled up the entire gang for a feast at MNMI, rest assured you’re in for a belly-busting epic eat-out. Order your fill of sesame-studded kulcha and garlic naan, roti and paratha, available in assorted flavours, to accompany an assortment of curries, dals and kormas.

Lip-smacking enough that you won’t even miss the meat, from ladies finger-loving bhindi masala to eggplant-ecstatic bhaingan bharta and cashew-creamy, spinach-with-fenugreek methi masala. Other possibilities include the paneer butter masala (with house-made cheese, the vegetarian’s alternative to chicken tikka masala) and never-boring dal (tadka or makhani? order both!). 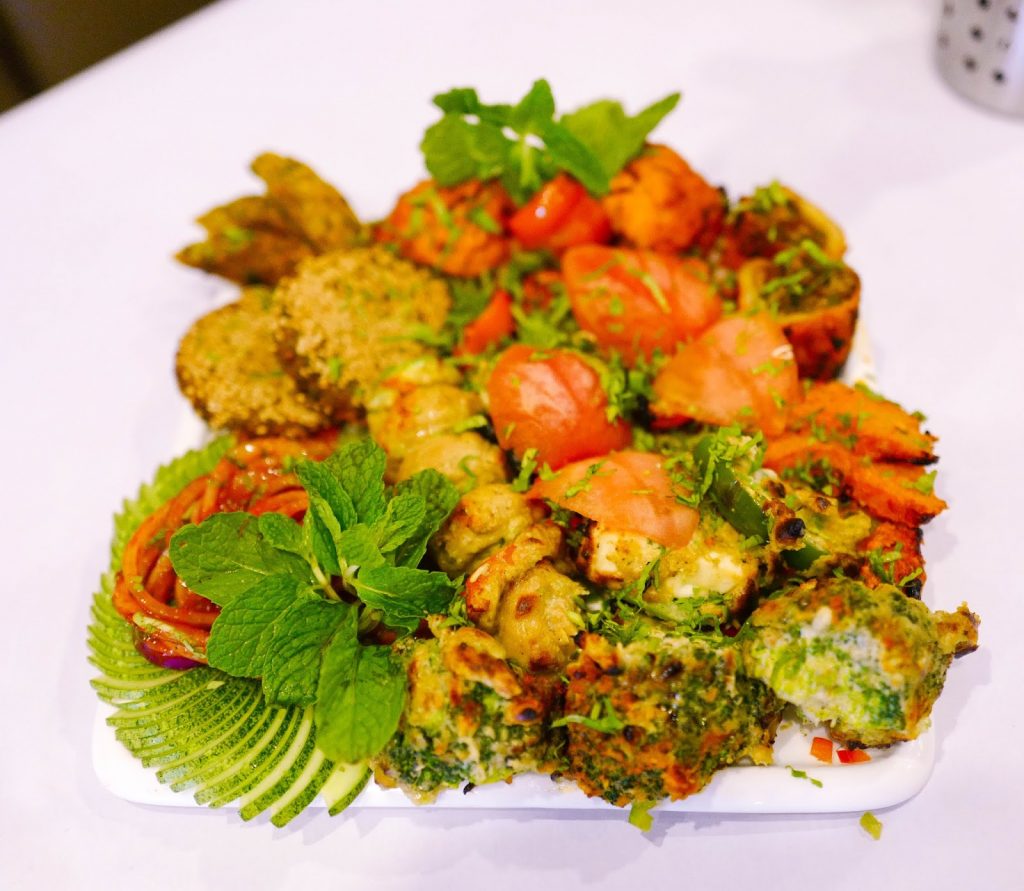 The kitchen is also capable of whipping up a monumental tandoori platter – without an ounce of chicken or lamb, but comprising wholly vegetarian-friendly ingredients, assembled in interesting ways. If you relish mushrooms, cauliflower, tomatoes, carrots and much, much more – the harvest of the earth in its full, flowering bounty, taking pride of place to bask in the limelight – this plate will put a spring in your step and bring the fragrant flavours of summertime to your palate. 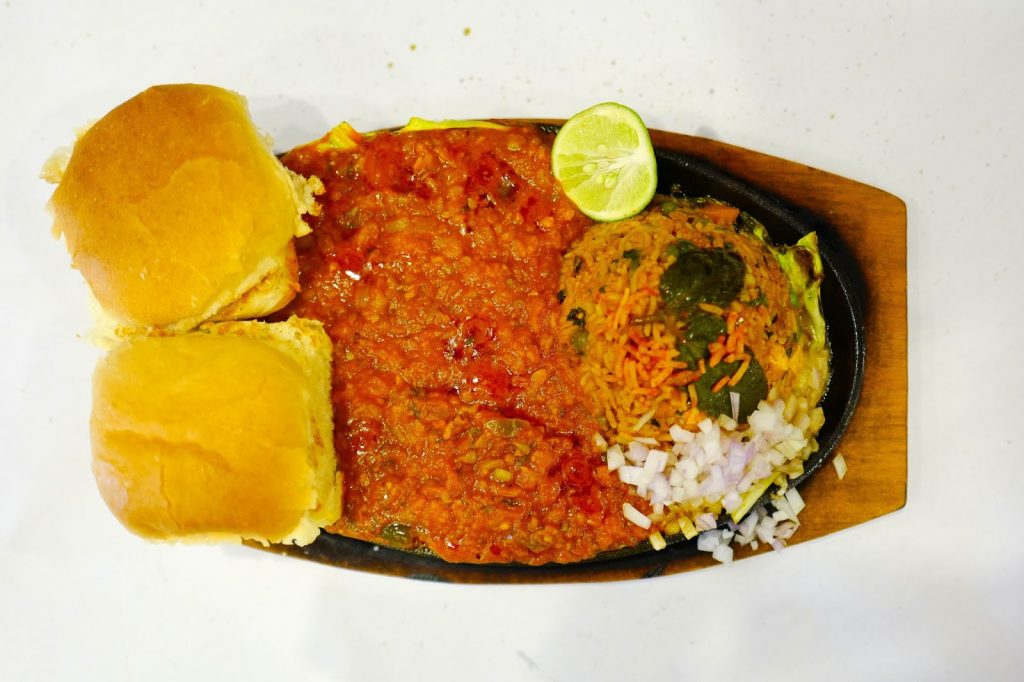 Our meal soared to sizzling heights with mounds of rice that surface steaming at the table – have these grains in all their glory, butter-cooked with vegetables in a sultry sauce that’s simmering with fresh, juicy tomatoes, or fried with a side of noodles in an Indo-chinese serving, jazzed up with sweet-sour Manchurian vegetable balls.
Remember when we said MNMI boasts a long menu? If size matters to you, take on the challenge of the four-foot dosa, a paper-thin, two-arms-length delight, served warm from the hardworking kitchen, completed with a potato filling and plenty of sambar and chutneys.
Of course, with Idly in the eatery’s name, the idli rice cakes are also a scrumptious should-order, tinged with pure ghee for easier digestion, made flavourful with bowls of sambar lentil stew, coconut chutney and tomato onion chutney. If you prefer a fluffier, doughier delicacy, order the bhatura, fried bread rounded out with white chickpea chana masala. 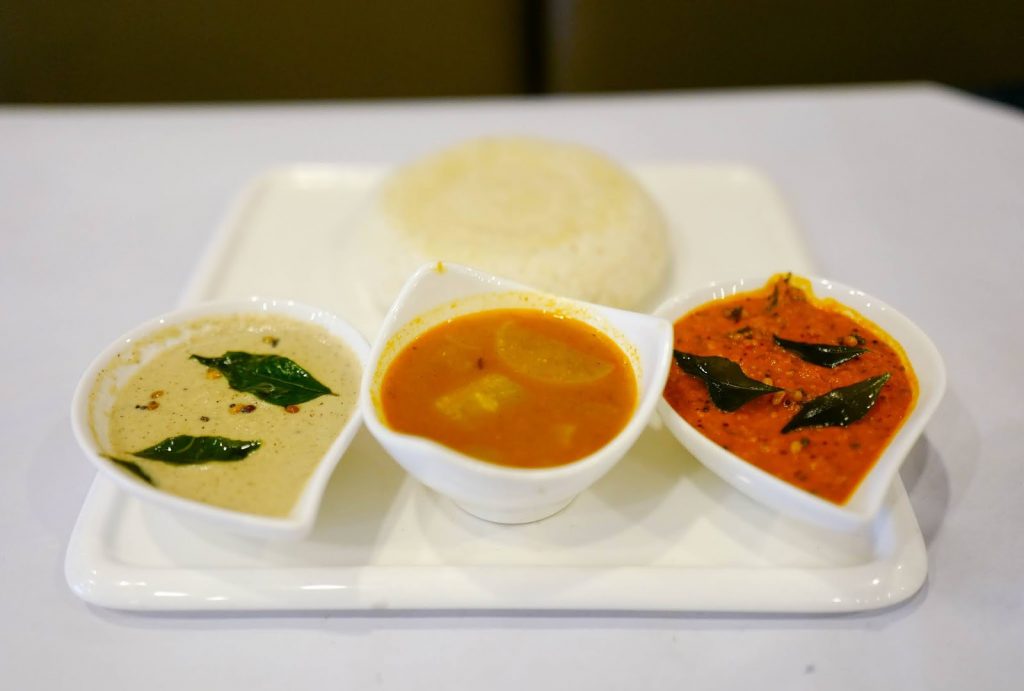 MNMI’s menu takes inspiration from multiple corners of India, from North to South, bringing together beloved classics that generations have grown up on. The khichdi is the subcontinent’s ultimate comfort food, considered one of the first solid foods that babies consume – a congee-like concoction of rice and lentils, gently spiced, partnered with yogurt-based kadhi chickpea flour gravy. Also soulful is the vada, dunked with vegetables in a light, mellow stew.
Surprise! Even pizzas make a special appearance at MNMI, though not quite in the quintessential Italian fashion. We particularly like the larger one, featuring a crunchy dosa base, a light-crusted novelty that’s prepared on a massive tava griddle, showered with grated cheese and chopped vegetables. If you like creative fusion inventions, bookmark this one-of-a-kind Indian-Italian pizza. 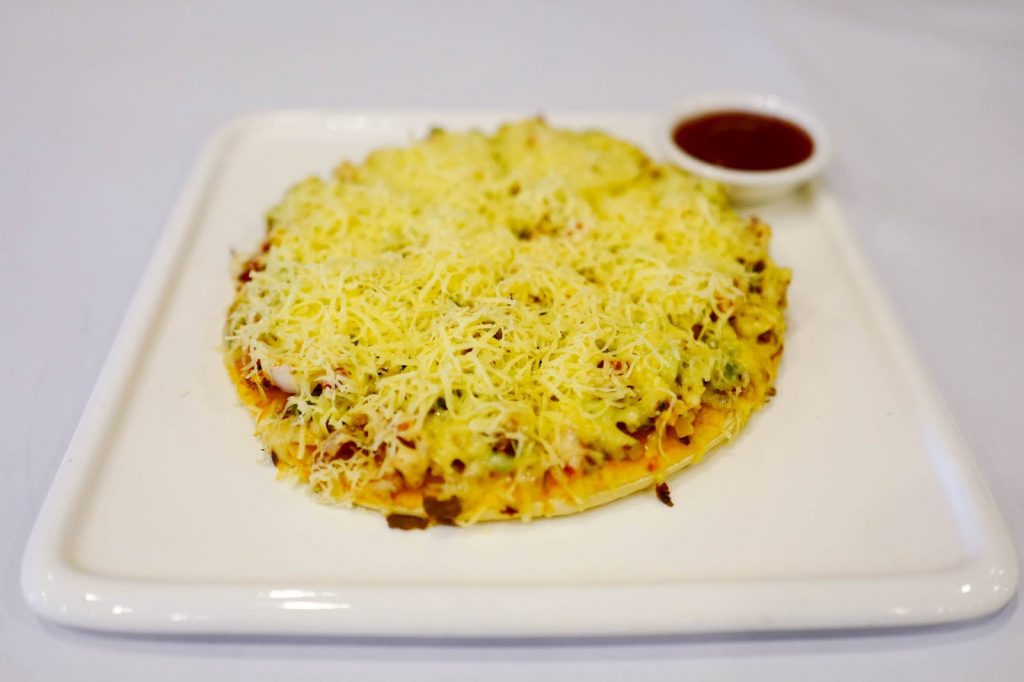 You’ll also discover a handful of Indo-Chinese dishes here, the initial creation of Chinese restaurants that opened in India in recent decades. The Manchurian vegetable balls are popular, laden with carrots, cauliflower, cabbage and spring onions; of course, fried noodles are also a staple, while the Dragon mixed veggies will suit fans of battered munching.
If you live or work around Brickfields, make a beeline for MNMI’s weekday lunch buffet – every Monday through Friday, 1130am-3pm (except public holidays), you’ll find an all-you-can-eat smorgasbord of smashing vegetarian specialities to soothe the spirit. Wholesome and freshly cooked home-style stuff, free of MSG, preservatives, artificial flavouring and colours. 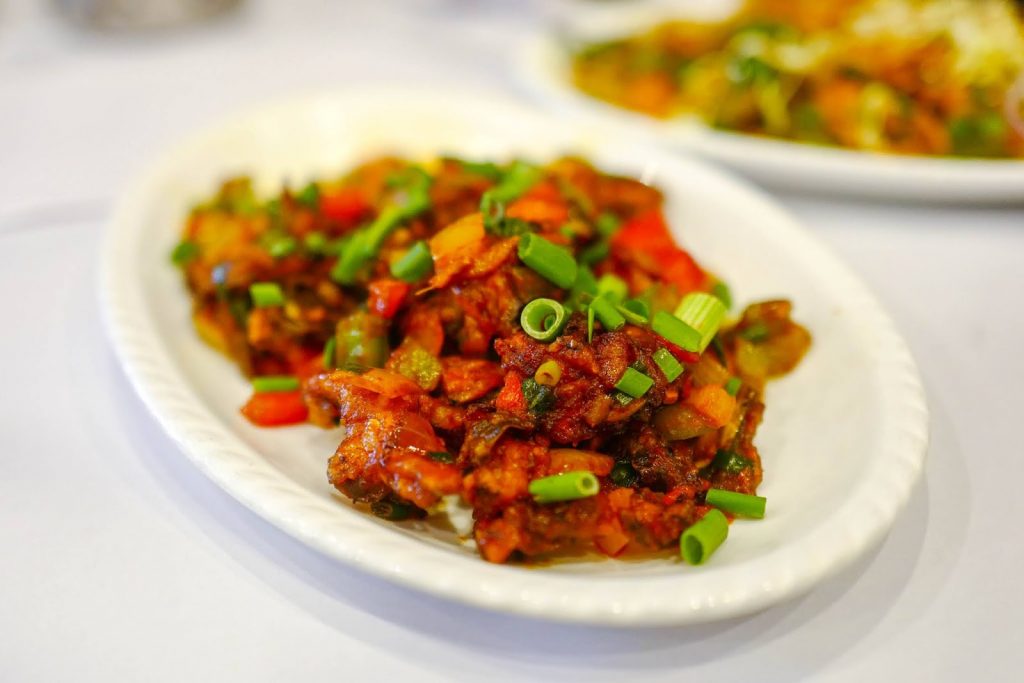 At RM15 per person, this is sumptuous value, popular with the nearby office crowd. The selection changes daily, showcasing at least a starter, salad, two curries, two vegetables, one lentil dish, rice, chapati, chutney, dal, pappadum and rasam. Build your own lunch platter with tasty temptations that might span jeera aloo to palak corn, black chana to onion curry. Fridays are particularly notable, since you’ll find additional sweets to celebrate the end of the workweek, as well as special vegetarian dishes like gatta sabji (dumplings in yogurt sauce) and kheer (flavoured pudding). 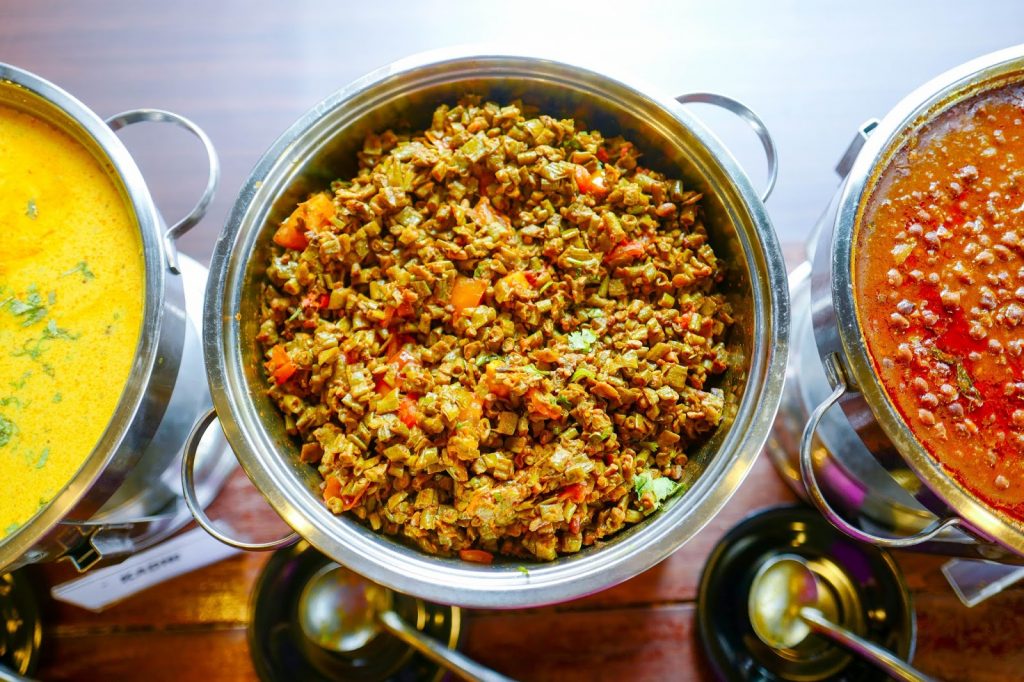 Speaking of sweets, save space for these – MNMI’s sugary confections and bonbons could be irresistible, with everything from chocolate bharfi to dates-laden bharfi (a vegan treat with no added sugar, sweetened simply by the dates), kesar milk-based bharfi to the festival favourite of saffron-rich boondi ladoo, milky globules of motichoor ladoo to pancakes of malpua stuffed with thickened curdled milk, cardamom-scented malai peda to creamy malai mini-sandwiches, the Bengali sweet of chum chum that’s similar to syrupy rasgulla dumplings, cashew-nutty kaju katli, and much, much more. You could make a meal purely out of desserts here if desired. 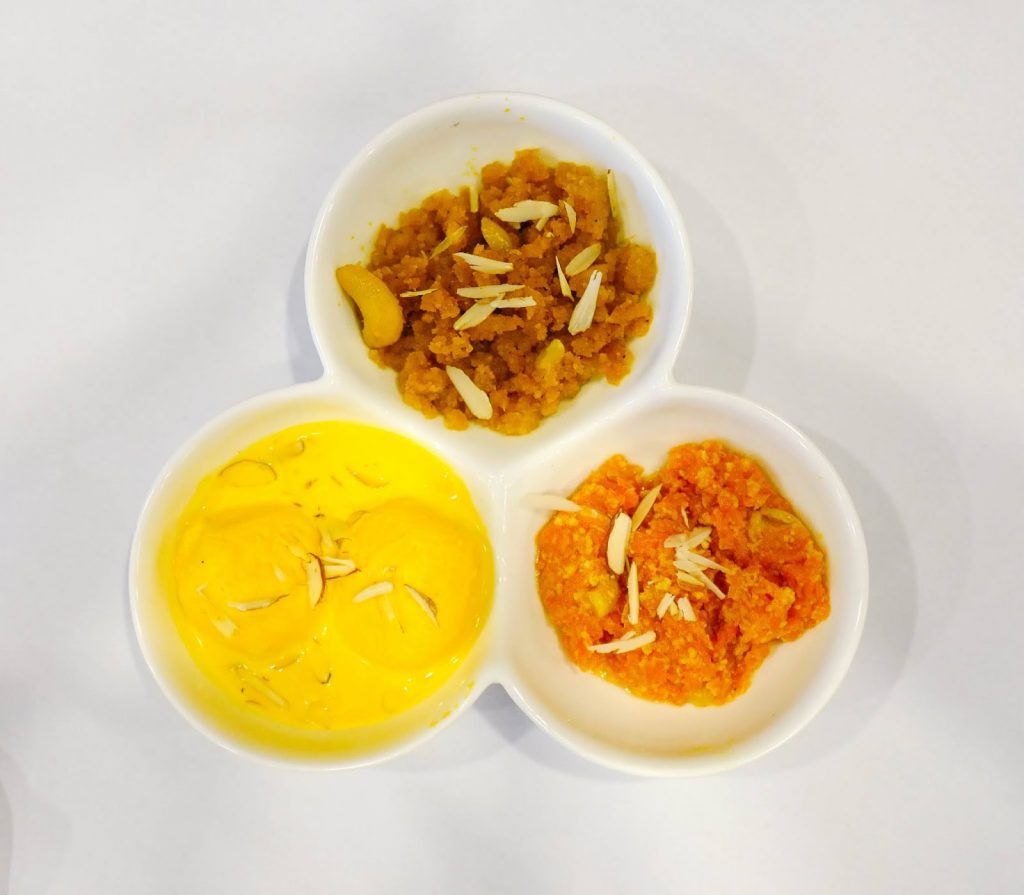 A meal at MNMI won’t be punishingly fiery, but the spices will still linger – cool down with a chilled conclusion of saffron ice cream scattered with pistachio slices, paired perhaps with almond or carrot halwa. Don’t skip the ras malai, India’s closest equivalent to cheesecake, featuring curd balls soaked in clotted cream and cooked with milk. 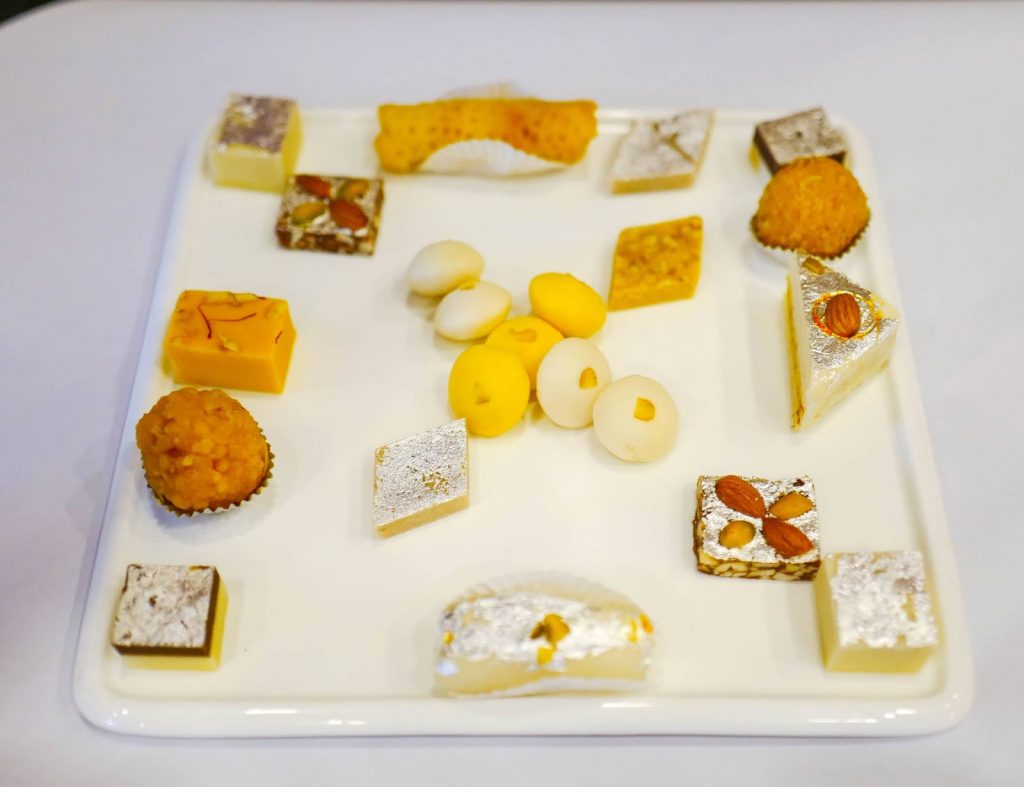 Beverages are also reviving, in varieties like mint with coriander or dates with tamarind. But if you want a cross between dessert and drinks, falooda is the ultimate quencher, layered with rose syrup, vermicelli, sweet basil seeds and ice cream.